Do you usually install your airline mobile app when traveling? You may think twice before using it for your next vacation.

Our latest study based on the security testing of global top 50 airline mobile applications shed the light on some alarming data privacy concerns. The audit was performed this week by Pradeo Security, an engine designed to reveal mobile apps’ behaviors (data processing) and vulnerabilities. Among the 50 mobile applications tested, had been included the most used ones globally, mainly from North America, Western Europe and Eastern Asia.

To provide users with the best services, airlines enable their applications with functionalities to scan passports and credit cards, check-in, make mobile payments, consult boarding passes, etc. This study shows that at least 49% of airline applications manipulate users’ location information, gallery, and contact list. Then, a third of them send the personal data in question over the network. Besides, what’s even more surprising is that most of the time, the transmission is performed through non-certified connections, thus highly facilitating data theft. The study reports that airline applications use an average of 14 unsecure connections to servers. 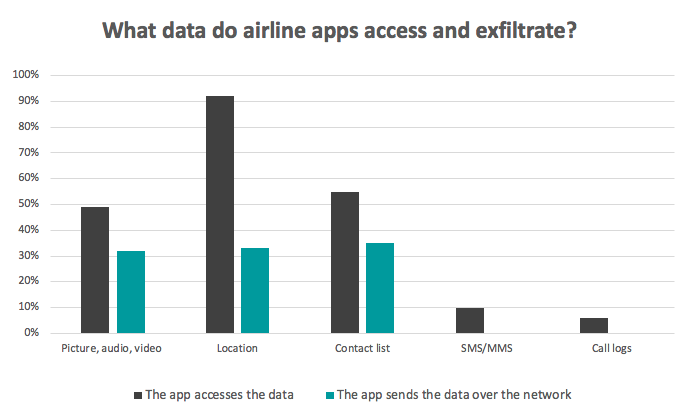 Short go-to-market processes often lead to code negligence regarding security. In the audited sample, we found an average of 21 vulnerabilities per application, a very high number when put in conjunction with the sensitivity of the information manipulated (passport, credit card…). The 10 code vulnerabilities most detected among the sample are known for greatly exposing applications to denial of service, data leakage and man-in-the-middle attacks.

The vulnerability gives permission to other applications to bypass some security access, to give direct access to potentially sensitive data.

The vulnerability gives permission to other applications to send malicious intent to the application. Acting on receipt of intent without validating the caller's identity may lead to sensitive data being revealed or to denial of service.

This App uses SQL Cipher. But the secret may be hardcoded.

The vulnerability gives permission to other applications the power to start or bind the application's service. Using the flaw can lead to sensitive information leakage towards malicious apps or result in denial of service.