Mobile apps are now on top of our digital consumption and they process data from millions of users all around the globe every day. The growing request of renewal and immediacy pushes organizations to create applications at a very fast pace, leaving behind the security tests.

A mobile application can contain two types of vulnerabilities:

Pradeo’s behavioral analysis engine factors OWASP vulnerabilities in, among hundreds of others, and detects their presence in every app it analyses. On a representative sample of 2 million applications tested on our platform, Pradeo’s research team found out that almost one-third of them contain an OWASP vulnerability. 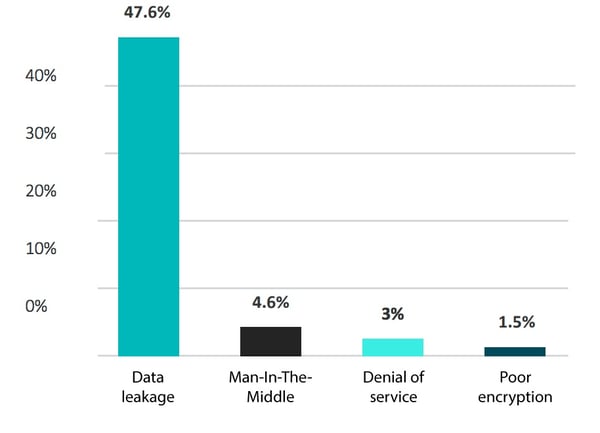 Among the vulnerabilities detected in the analyzed applications, 47% can lead to data leakage. Data disclosure became in the last few years the main threat that companies need to face.

A Man-In-The-Middle attack happens when a communication between two parties is intercepted by an outside entity. The perpetrator either eavesdrops on the communication or impersonates one of the two parties, making it appear as a regular exchange of data. 4.6% of applications tested contain vulnerabilities that can lead to this type of attack, exposing users to fund theft, data theft or their IoT objects takeover.

A denial-of-service (DoS) is any type of attack where the attackers attempt to prevent legitimate users from accessing the service. In a DoS attack, the attacker usually sends excessive messages asking the network or server to authenticate requests that have invalid return addresses.

Among the sample of apps, 3% contain vulnerabilities to this type of attacks, putting at risk the availability of their services.

Cryptography techniques aim at making some data illegible to ensure their security. 1.5% of the tested apps showed encryption weaknesses, leaving a breach towards sensitive data.

Data collected by mobile apps: the gap between what's disclosed and reality