The millennial opens up a chapter for security in which the mobile environment is becoming the Achilles’ heel to organization.

Mobile protection is the new field of expertise drawing the attention of security heads, providing a response to address the broad spectrum of mobile threats. In contrast with so far used security principles, mobile threat defense has to rely on machine-learning processes and requires the mastery of state-of-the-art mobile technologies to provide a reliable security.

Through the years, the Pradeo intelligence center collected 100 billions of mobile security data and developed an advanced Artificial Intelligence process delivering the most accurate threat detection technology of the market.

The mobile environment comes as a highly intricate combination of elements. Accessible information such as package names, required permissions, network or device configurations, etc. do not provide on their own a real visibility into mobile security and must be covered with an in-depth break down and analysis of the environment to get an accurate understanding of the security context.

Pradeo's technology detaches the mobile environment into a framework of billions of security facts to be processed by its engine and drawing undeniable inferences. 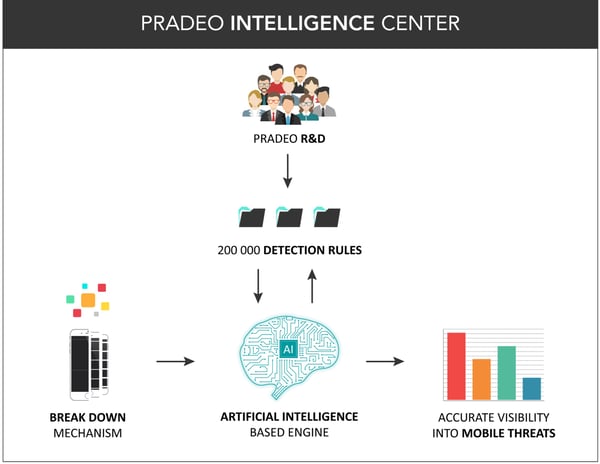 The artificial intelligence-based engine handles the threat detection. It runs a multidimensional analysis and sifts security facts in the light of Pradeo’s detection rules database. This base is constantly auto-enriched by the engine from the new risky security context it detects and by Pradeo’s research and development team

The unparalleled accuracy Pradeo shows in mobile threat detection comes from its unique machine intelligence mechanism refined over the billions of security facts processed throughout the years.

On an ongoing basis, the Pradeo Intelligence Center fine-tunes the engine, empowers new detection rules and enriches the applications database through an automatic store crawling process.

The key to behavioral analysis

Behavioral analysis covers two methods often referred as “static” and “dynamic”. From a basic standpoint, the static approach covers the detection of settings and simple actions processed within the mobile environment. This initial level of analysis typically ends up with a score representing the likelihood for the identified set of parameters and actions to be an effective threat.

Thus, “score-based” or “risk-based” techniques turn out to generate false-positive and false-negative, making the analysis inefficient.

Pradeo’s research team has gone much further to break down the mobile context into an advanced representation of series of simple and complex behaviors depicting an accurate view of the execution.

They leverage this unique visibility into the mobile implementation to guide the dynamic analysis on specific blind spots and get the best of both analyses.

As being non-deterministic, dynamic analysis by itself may come as searching a needle in a haystack. While mobile threat detection is expected to be fast, reliable and consistent, dynamic analysis requires to be framed with clear boundaries to provide valuable insights.

Pradeo’s technology combines both methods to desegregate the mobile environment and establish a sound basis to be scrutinized by its threat detection engine.

Pegasus Resurgence: All You Need To Know

Our cybersecurity predictions for 2021